Thumbnails are a great way to explore different story ideas without getting too attached to anything. 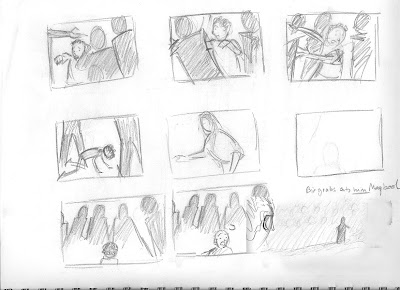 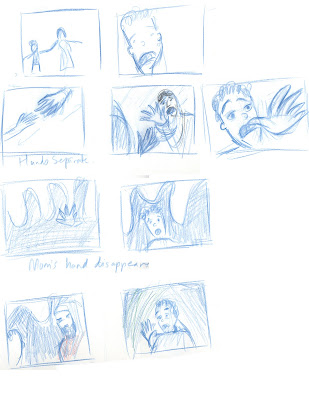 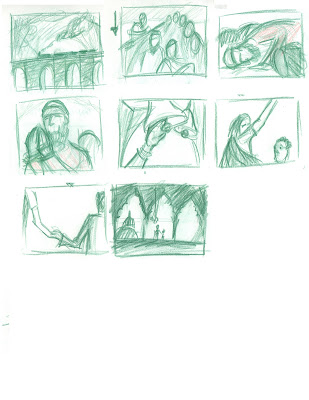 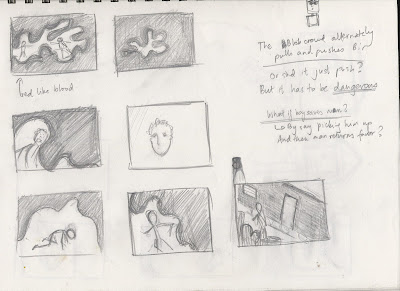 I plan to make this film in 3D CGI. My previous 3D film has a relatively clean look, but with my thesis I'm trying to create a very textured, worn look and "dirty" up the frame. The 3D elements will be created in Maya, and I'll likely composite in Shake (maybe After Effects). Although the characters and environments will be 3D models, I'm going to experiment with rendering them flat - sort of like a textured Toon shaded look. Hopefully this approach will also have the side effect of keeping my render times lower than if I went with a Global Illumination-type look, which in turn will give me more time to play with the art directing.

In addition, I'm going to use a lot of handmade (possibly animated) textures along the lines of the references and tests that I posted about earlier. I'm also looking at puppet/stop-motion films for character design ideas. As I've mentioned elsewhere, I'm going to do some tests with Massive for the crowd scenes.

Finally, there will probably be a tiny bit of live action in there too. During my Contemporary Topics project, I got some more experience integrating a live cloak onto my animated character. Similarly, I used some dry ice footage as fog for my last film. Based on these projects, I feel that elements like dust (which I plan to have a lot of) are a lot easier to create in live-action than in CG, and can be integrated pretty well with some careful compositing and futzing with the frame rate. Live elements also seem to ground the animation, and make the environment seem more believable and organic, even when you're not going for a photorealistic look.
Posted by Arjun at 9:47 PM No comments:

One of the big technical challenges with this project is depicting the sheer number of people involved in the migration. Since my story has Bir getting lost in the midst of a mob, I also need a way to pull the characters out from the background. I'm still exploring how I would achieve the sense of chaos, but I do know that I don't want the film to feel like it should have been made in live-action. As a result, I'd like to use lighting and painting techniques to stylize the crowd into a single mass. I did the following "style frame" to explore this idea: 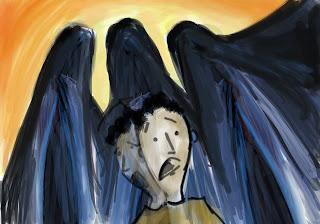 I plan to backlight the crowd and exaggerate depth of field to really pull attention to the main characters and have the crowd be a mass. Of course, this is going to mean a lot of post-production work, but I really enjoy art directing and compositing, so I'm looking forward to it.
I'm also about to start experimenting with Massive, a crowd simulation software that makes it easier to choreograph CG shots with many characters. So even though I want a stylized look for the crowd, having a Massive layer will give the crowd a little more internal movement that might look pretty cool. 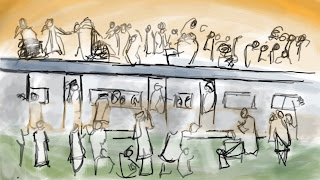 September 26: I found this picture that reminded me of my concept - 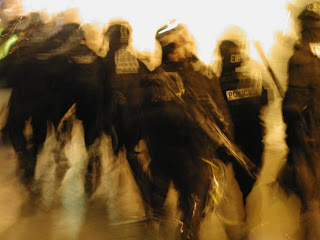 At the same time that I was developing the idea for this film, I did a project for my Contemporary Topics in Animation class that explored a stylistic direction that I may take with this project. While the actual content of the project was quite different, the colors and mood are elements that I hope to carry over into my thesis. 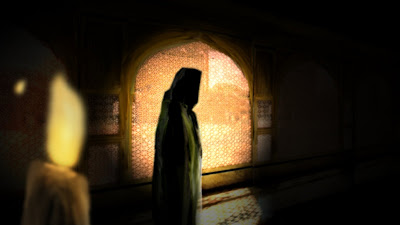 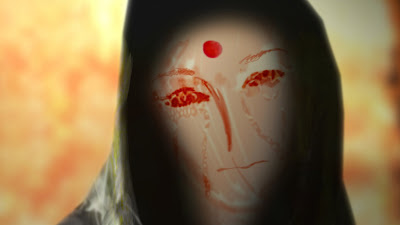 ***Addendum
Maaz by Christian Volckman is another cool film that I came across that is representative of where I want to go with the look:
http://mag.awn.com/index.php?ltype=pageone&article_no=860&page=3

A film that I really like in terms of visual look and style is Wojna
I want my film to have a handcrafted quality and I think that this film is a good example of how CG and handdrawn elements can be combined to this effect. 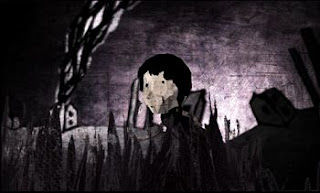 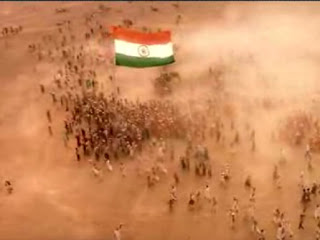 For art references, I've been looking at the work of Indian painter, MF Husain, because I really like the texture and the broad patches of color he uses in these two works: 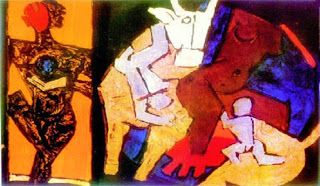 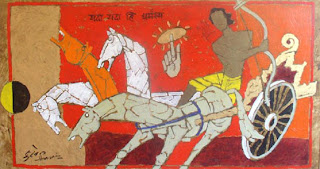 This painting by Hebbar has a similar feel, though his color palette is much more muted: 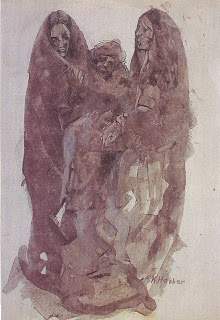 In addition, I've been looking at some Giacometti sculptures to help me with visualizing generic characters that I can use for the crowd: 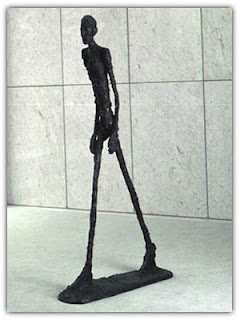 One of my most significant sources of visual reference from this period is the work of Margaret Bourke-White, an American photo-journalist who captured images of Gandhi, Jinnah, and the massive migration of people during partition. I'll be referring to these images when creating my environment and characters.
Besides the images below, more of her work can be seen online at the BBC website 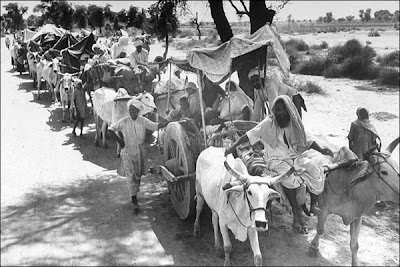 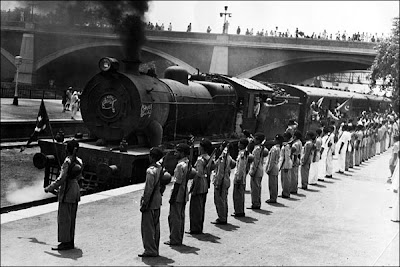 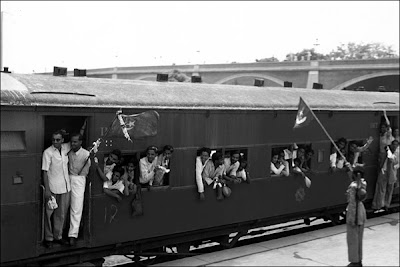 A public domain image that also reflects the scale of the migration: 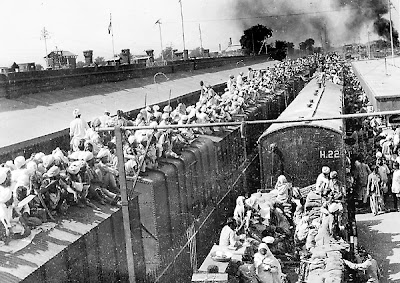 Here's a visual depiction of how India was partitioned. Pakistan was initially comprised of both East and West Pakistan, but in 1971, East Pakistan gained independence and became Bangladesh. My story is set in West Pakistan. 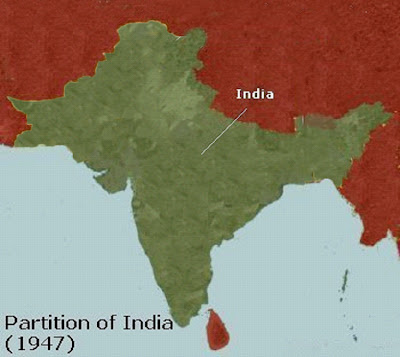 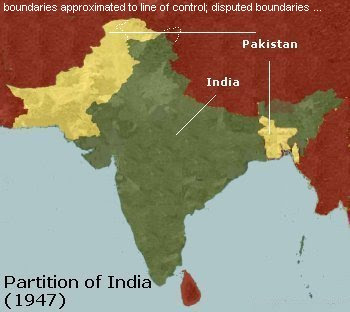 First, a word about the historical context in which this film is set:
The partition of India into was the last act of the crumbling British Raj, when an independent Islamic state, Pakistan, was split off from India. This geographical division along with years of "Divide-and-conquer" British policies, poor official foresight and a host of other factors resulted in the largest ever human migration as Hindus fled to India and Muslims to Pakistan. Fifteen million people were displaced from their homes, and innumerable families and communities were fractured. In addition, between 500,000 and 1 million people were killed, primarily in communal violence/ethnic cleansing at the borders of India and Pakistan. A lot has been written about the event, but most people I encounter in the States don't know about this aspect of the history of India and Pakistan. Here's a link that goes into more detail about the event: http://www.newyorker.com/arts/critics/books/2007/08/13/070813crbo_books_mishra?currentPage=1
This time period has always fascinated me because both my sets of grandparents had to leave behind their homes and belongings and flee from what is now Pakistan.

Partition may have fractured an entire generation of people, but amongst the horrific carnage that occured, there are innumerable stories of escape and kindness that transcended communal boundaries. My inspiration for this film came from a partition story I heard from my father. My great-uncle - Bir Bhalla - would have been attacked by Muslim refugees at a train station if not for the intervention of a Muslim man. The man placed his Muslim prayer cap on my great-uncle’s head, who was a Hindu. Something about that gesture has always intrigued me - it's simple, yet complex and symbolic, and so powerful given the context in which it occurred. As result, I've decided to turn that idea into a film.

In the current version of my story (which is slightly fictionalized), Bir and his mother arrive at a train station in Lyallpur (now Faisalabad), Pakistan, to take the train to Amritsar, India, since they are Hindus. At the same time, a Muslim refugee from India - Maqbool - arrives at the station. Bir is separated from his mother when a fight breaks out between the Hindus and Muslims at the station. Bir gets lost in a section of the crowd that is comprised mainly of Muslim refugees and his life is in danger when Maqbool rescues him by placing his own prayer cap on Bir's head.

At this point, I'm still trying iron out the story so that it conveys the premise that compassion overcomes religious differences. This task is challenging because my goal is to depict the events such that the film does not come off as anti-Muslim. Moreover, since so much has been written about partition, I've also been thinking about how to bring something new to the topic. That's why my protagonist (i.e. Bir) is a child who is 10-12 years old. This will allow me to explore the events from a child's perspective and use animation to (hopefully) create some compelling psychological imagery.
Posted by Arjun at 3:42 PM No comments:

Welcome to my thesis blog! In my final year at USC's MFA animation program, I'm going to be working on a film set during the partition of India in 1947. This is a space for me to document my work and organize my thoughts as I embark on what promises to be a very challenging project.
Posted by Arjun at 3:17 PM No comments: 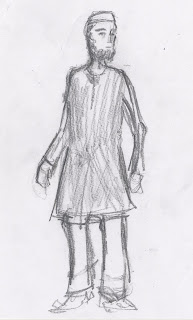 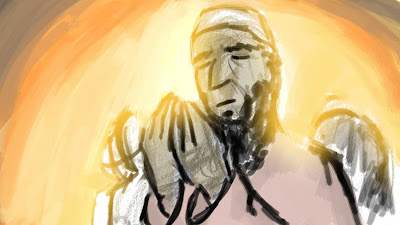 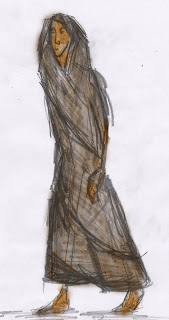 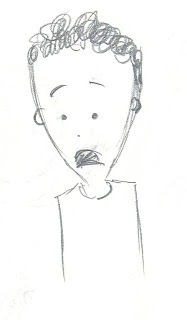 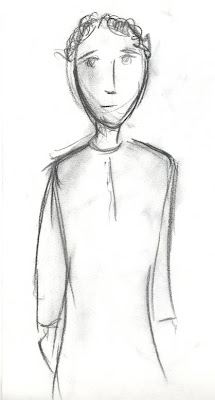