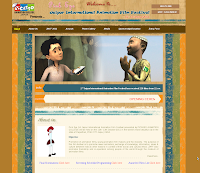 Nice to receive these awards at an animation only festival. Jaipur is a lucky city for Topi - the film previously received the Critics' Award at the Jaipur International Film Festival.

The Express Tribune 'Video of the Day' 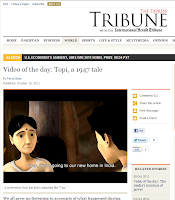 Topi just got a 'thumbs up' in Pakistan's Express Tribune:

"We all grew up listening to accounts of what happened during the 1947 partition, but Topi, a unique, animated short film, explores the sad tale of what the poor people of both countries went through in a new artistic perspective.


Said to be the only animated film on this topic, Topi is a story of a Hindu boy named Bir who migrated to India from Pakistan along with many other fellow Hindus.


For many, the partition was a moment of grief which forced them to leave their homeland for a new destination; a home they never asked for. This short animated film managed to capture the essence of this largely unexplored aspect of the migration.


Video rating: Thumbs up, for making a film on what people went through during the migration and not what people at the helm of power struggled for. "